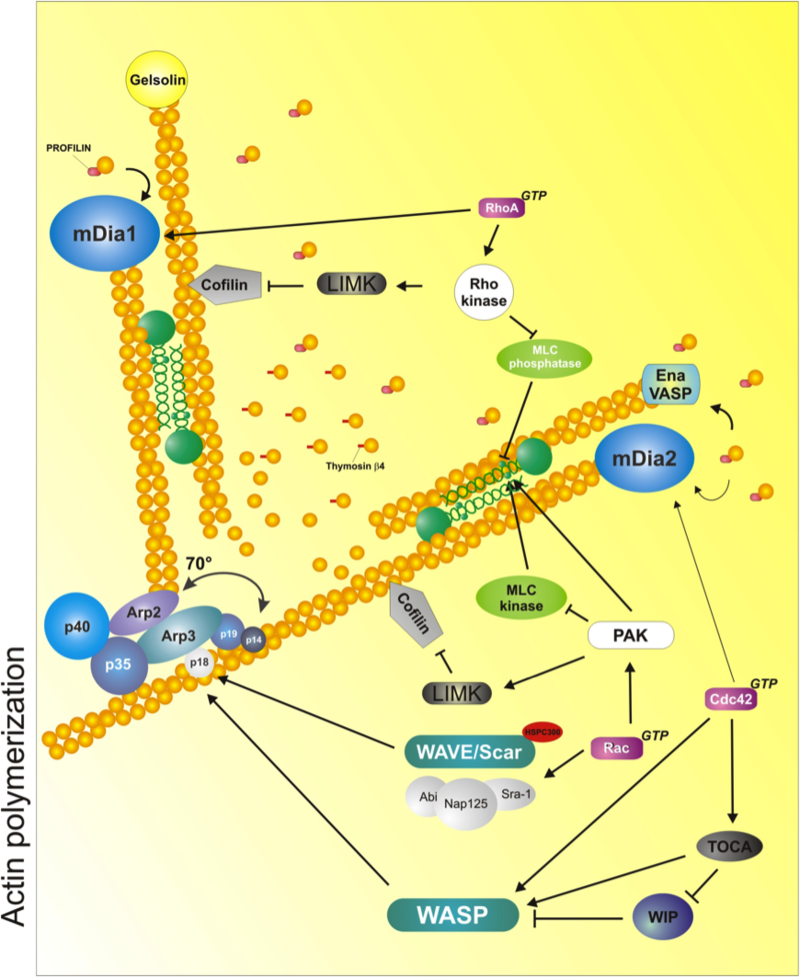 Scheme depicts the major mechanisms and molecules implicated in regulating and enabling actin polymerization/depolymerization and organization. The Arp2/3 complex induces branching by attaching to the side of a pre-existing filament and promoting de novo polymerization. Formins such as mDia1 and mDia2 induce processive actin polymerization by attaching themselves to the barbed end of the filament. The formins compete with actin capping proteins, such as gelsolin and capZ (not depicted). Ena/VASP serves a dual role as an adaptor protein and a 'leaky' capper, which enables actin polymerization through other molecules that are part of a complex (not shown). Myosin II (in green, between filaments) cross links antiparallel actin mediates contraction due to its ATPase-dependent motor domain, and its cross-linking, ATPase-independent activities. Cofilin (grey arrowhead) severs actin filaments, promoting the formation of new barbed ends. It also generates actin monomers to be incorporated to the filaments via profilin/formin (treadmilling). Another small protein, thymosin β4, sequesters actin monomers and maintains the pool of available monomers. Some of the signaling proteins that control these molecules are also shown. They include: Rho-kinase (ROCK), which is under the control of RhoA and activates LIMK to activate cofilin, blocks the myosin phosphatase, promoting myosin activation, and phosphorylates and activates myosin directly; PAK also activates LIMK but it inhibits MLCK, inactivating myosin II; the WAVE/Scar-Abi complex and WASP, which activate the Arp2/3 complex, are under the control of Rac and Cdc42, respectively; finally, formins are also activated by small GTPases directly (mDia1 by RhoA; mDia2 by Cdc42). Used with permission from Vicente-Manzanares et al., 2005 J.Cell Sci. 118,4,4917.
click to enlarge

Protrusion involves the extension of cellular membranes. In most cells, a leading protrusion points in the direction of movement and is part of a polarity axis (see section on Polarity). Protrusion usually occurs in response to chemoattractive signals in the microenvironment that are detected by the cell: for example, migrating amoebae respond to the feeding cue cyclic AMP, whereas leukocytes are induced to move towards pro-inflammatory cytokines released by injured tissue. However, some cells extend protrusions in a probing, exploratory manner in the absence of directional stimulation[1].

The formation of protrusions requires the integration of several cellular processes. The force for membrane deformation is provided by the actin cytoskeleton, the dynamic polymerization of which pushes the membrane forward. The membrane itself expands under tension, a process that requires membrane trafficking and the fusion of membrane-containing vesicles to support the increase in membrane surface. Finally, protrusions must adhere to the substrate. If they do not attach, protrusions are unproductive and tend to move rearward in waves in response to the tension generated in the cell, in a process known as 'membrane ruffling'.

Actin filaments constitute the physical backbone of a protrusion. Their polymerization and organization also determine the overall shape of the cell and contribute to its internal organization. Actin filaments comprise arrays of monomeric globular (G)-actin subunits that polymerize in a process catalysed by ATP hydrolysis. During the polymerization process, ATP bound to G-actin is hydrolyzed to ADP⋅Pi as the bond between the two monomers forms. In filamentous (F)-actin, ADP⋅Pi-actin forms stable filaments; release of the phosphate destabilizes the structure, prompting depolymerization[2],[3],[4].

Similar to microtubules, actin filaments are intrinsically polarized, reflecting the oriented, head-to-tail structure of the constituent monomers, and display a fast-growing 'barbed' end, where new monomers are incorporated, and a 'pointed' end, which represents the origin of the growing filament and exhibits filament ageing (bound to ADP alone)[3],[4].

Actin filaments adopt different morphologies depending on the number of filaments and the type and number of actin-binding proteins that associate with them. Actin-binding proteins, such as myosins, α-actinins, filamins and others, have cross-linking activity, and can organize actin filaments into bundles or a branched network. If two filaments display their barbed ends in the same direction, the resulting bundle is parallel; if the barbed end and the pointed end point in opposite directions, the bundle is anti-parallel. The consequent organization of actin filaments into bundles or a branched network can give rise to different cellular structures.

Actin filaments adopt different morphologies depending on the number of filaments and the type and number of actin-binding proteins that associate with the filaments; the usual results are filament bundles or a branched, dendritic structure. The details of these associations lead to different cellular structures:

Elongation of parallel bundles of filaments in filopodia and of dendritic networks leading to sheet-like protrusions comprising lamellipodia and lamellae is actively driven by actin polymerization, which is regulated by multiple regulatory proteins.

Proteins that bind to G actin: Two molecules regulate the availability of actin monomers for polymerization - profilin and thymosin β4. Both molecules bind specifically to G-actin, but profilin can also bind to different actin polymerization nucleators and stimulators (e.g. formins; see below), and thereby functions as an actin monomer 'shuttle'[16]. By contrast, as thymosin β4 does not bind to any nucleator, it is believed to sequester G-actin and maintain an appropriate reservoir that enables the release of G-actin to profilin to promote the growth of actin filaments[3],[4],[16],[17].

Proteins that maintain the pool of G-actin: Monomeric actin is mainly derived from two sources. One is de novo synthesis. Notably, actin synthesis is concentrated at sites of protrusion, as revealed by the presence of β-actin messenger RNA in protrusions[18]. Monomer recycling, driven by depolymerization of preformed filamentous structures, provides the other source. Depolymerization is a spontaneous process that occurs at the pointed ends owing to filament ageing (bound to ADP alone; see above), and also owing to filament severing, which is catalysed by ADF (ADP depolymerization factor)/cofilin. As a consequence of its severing function, cofilin carries out a dual purpose: creating new free ends from which polymerization can be reinitiated, and also breaking down and depolymerizing old networks for monomer recycling[19],[20]. Cofilin is regulated by phosphorylation by LIM kinase (LIMK), which is, in turn, regulated by phosphorylation by p21-activated kinase (PAK) or Rho-kinase (ROCK)[20],[21]. There is also evidence that another actin-binding protein, coronin, regulates cofilin activity through recruitment of a specific phosphatase[22]. Coronin, in contrast to cofilin, binds to the sides of actin filaments and protects them from cofilin-mediated severing and depolymerization[23].

Promoters include direct nucleators - for example, formins[25]. Formins are multi-modular proteins that bind to the barbed end of actin, to profilin and, in some cases, to microtubules, regulating their stability. They function as processive polymerization devices that initiate de novo actin filament assembly by recruiting actin monomers and using them to nucleate new filaments. Formins are then able to maintain filament elongation by remaining bound to the fast-growing end and promoting addition of further monomers, simultaneously preventing binding of capping proteins (see below)[25],[26]. There are many formins, the best characterized of which are mDia1, mDia2 and mDia3. Their activity is regulated by binding of small Rho GTPases (for example, RhoA regulates mDia1 and Cdc42 regulates mDia2), which relieves head-to-tail autoinhibitory interactions in the formins[26]. Other proteins, such as vasodilator stimulated phosphoprotein (VASP) and its relatives Mena and Ena/VASP-like (EVL) also prevent binding of capping proteins and promote actin polymerization through profilin, but cannot nucleate filaments de novo[27],[28].

Capping proteins terminate elongation, thereby limiting polymerization of new filaments[29]. CapZ is an α/βheterodimeric capping protein that is found in most eukaryotic cells, but there are others, such as adducin, which caps the barbed end of short actin filaments. Perhaps the best known capping protein is gelsolin/brevin, which is one of a series of family members that includes capG, severin, villin, adseverin, advillin and supervillin[30]. These proteins bind to the barbed ends with high affinity in the presence of calcium, and are also regulated by phosphoinositides[30].

The Arp2/3 complex is activated locally at the cell membrane by proteins of the WASP/WAVE family. The WASP family contains two main members: Wiskott-Aldrich syndrome protein (WASP), which is expressed exclusively in haematopoietic cells[32], and neuronal (N)-WASP, which - contrary to its namesake - is more widely expressed. Studies carried out within the past 5 years suggest that, although both Arp2 and Arp3 are required for nucleation in the presence of WASP, the loss of Arp2 does not interfere with binding to the N-WASP tail[33]. WASP/N-WASP/WAVE regulation of the Arp2/3 complex is tightly controlled by phosphorylation (WASP), small Rho GTPases (Cdc42 regulates WASP and N-WASP, Rac regulates the WAVE/Scar complex) and phosphoinositides[24],[32],[34]. The WAVE/Scar complex, (which includes the components WAVE, Abi, Nap125, Sra-1 and HSPC-300) is activated by binding of active Rac, which induces the dissociation of the trimer Abi-Nap125-Sra-1 from WAVE[35]. Additionally, Abi has been shown to connect the WAVE/Scar complex with formins[36], implying that the formation of the two distinct actin protrusions - Arp2/3-complex-generated branched networks and filopodia - may be linked[37].

Actin reorganization and bundling in the lamellum: In the lamellum, actin reorganization, rather than polymerization, is the leading mechanism thought to create the architecture in this region. Actin filaments are organized and bundled together in thick, linear, and mostly anti-parallel, arrays by the action of two families of actin-binding proteins: α-actinins and class II myosins. By crosslinking actin, these molecules generate supramolecular aggregates that bind simultaneously and bring together multiple individual actin filaments into stable bundles[17]. Myosin II also provides contractile force through an ATPase-driven conformational change that induces filament sliding[38]. In motile cells, myosin II activity undergoes regulation mainly by phosphorylation on its regulatory light chain by kinases that are, in turn, regulated by Rho GTPases, particularly RhoA. Other actin-binding proteins with crosslinking function - particularly tropomyosins and filamins - are also implicated in the creation of actin bundles in this region.

The membrane that forms the new protrusion could arise from the flow of membrane from other regions of the cell or trafficking of vesicles. Endocytic vesicles are targeted to the front and regulate actin polymerization through the localized delivery of pre-activated Rac, which depends on Rab5[39]. On the other hand, polarized exocytic delivery to the leading edge is a source of membrane that depends on microtubules and Rab8[40],[41]. Finally, protrusions are also sites of active endocytosis, which is important in the recycling of integrins and other receptors[42],[43].

Other modes of protrusion

In some specific cases, protrusion seems to occur in the absence of actin assemblies. For example, cells invading a three-dimensional (3D) matrix generate protrusive 'blebs', which are driven initially by hydrostatic pressure from inside the cell[44]. In this model, myosin II-based-contraction is thought to provide the contractile power that generates the hydrostatic extension of the blebs[45],[46]. Actin assembly is implicated in the later stages of protrusion to provide stability to the blebs (filling the bleb, which then evolves into a pseudopod/lobopod), or to retract it back into the cell membrane.

In summary, protrusion results from active actin polymerization and reorganization, and targeted membrane extension. Adhesion plays key roles in protrusion: it not only provides traction for membrane ruffles to become stable, but also nucleates and regulates signaling components that control actin reorganization and membrane endocytosis and delivery.