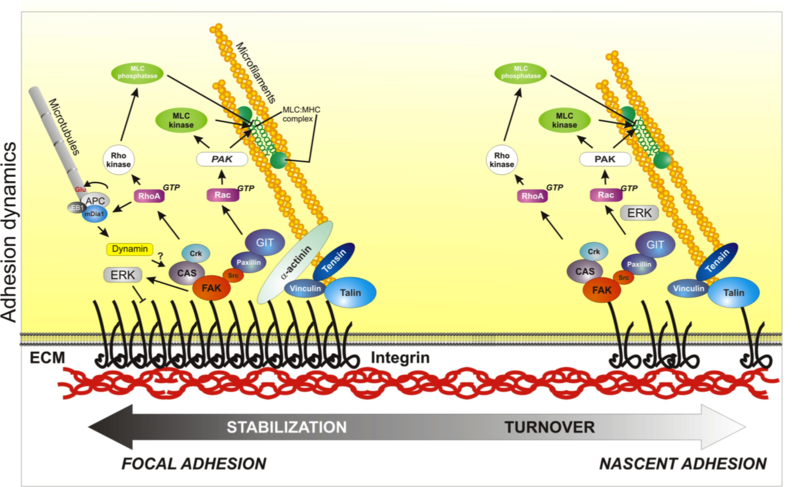 Scheme depicts the process of adhesion maturation. Nascent adhesions (on the right) are connected to the actin cytoskeleton by an actin linkage that includes talin, vinculin and α-actinin; other signaling adaptors are also recruited to these complexes, including FAK and paxillin. These adhesions generate signals that activate Rac, promoting actin polymerization and preventing myosin II engagement in the lamellipodium. These signals are also required for the dissolution of some adhesions (turnover) as the cell advances. Some adhesions mature into focal adhesions; this process is characterized by an enlargement and elongation of the complexes as well as the appearance of new players, like tensin. Some components have conformations that are tension sensitive (like talin, vinculin, and p130Cas, not shown here). Rho activation is thought to generate focal adhesions and actin bundling due to increased myosin II activity. Other events that occur at adhesions are internalization of the integrins, which is mediated by dynamin; and microtubule targeting, which may contribute to adhesion disassembly. Used with permission from Vicente-Manzanares et al., 2005 J.Cell Sci. 118,4,4917. click to enlarge

Cell adhesion (the physical interaction of a cell with another cell or with the extracellular matrix (ECM)) is essential for cell migration and tissue integrity. Cell-cell adhesion maintains epithelial tissues, supports functional contacts between specialized cells, and can facilitate directed migration (for example, radial glia can guide neuronal progenitor cells to specific layers of the brain). Cell-matrix adhesion is the best-studied form of adhesion that mediates cell migration, and is the focus of this outline.

The different types of matrix adhesion share many common components, as outlined below.

Integrins: Adhesion receptors constitute the physical link between the cell and the ECM. The best-studied adhesion receptors are type I transmembrane proteins that comprise the integrin family. Many combinations of the α and β subunits exist to give rise to multiple heterodimers that interact with specific ligands - components of the ECM[20],[21]. Integrins are finely regulated receptors; some are designed to engage in only appropriate circumstances (for example, to mediate platelet or leukocyte adhesion).

Integrins modulate the adhesiveness of a cell to the ECM in several ways. One way is by forming large clusters that increase the avidity of binding. The formation of clusters is usually driven by molecules that bind to the cytoplasmic tails of the integrins and crosslink them[22]. In some cases, the presence of membrane microdomains such as cholesterol-enriched domains and other lipid rafts or other transmembrane proteins (for example, tetraspanins) might modulate the avidity of binding[23],[24],[25]. Another way through which integrins modulate adhesion is through a conformational change that creates a high-affinity state[26]. The conformational changes are induced by the binding of molecules such as talin or kindlin to the intracellular portion of the integrin receptor subunit, which causes the molecule to extend and expose the sites of ligand binding ('affinity modulation', induced by so-called inside-out signaling)[26],[27],[28],[29]. Talin, in turn, undergoes conformational extension in response to other stimuli through a RAP1-RIAM (Rap1-interacting adaptor molecule) pathway, which is regulated by growth factors[30]. Integrins can also initiate intracellular signals following ligation by either direct or indirect association of adaptor and other signaling molecules with their cytoplasmic tails, a process termed 'outside-in' signaling.

Actin-ECM linkage: Some of the proteins that bind to the cytoplasmic tail of integrins also bind directly or indirectly to actin. These proteins include talin, vinculin and α-actinin. Notably, vinculin not only binds to actin, but also to the Arp2/3 complex, which nucleates actin filaments in the lamellipodium[31]. Talin binds to both integrin and actin[32],[33]; vinculin binds to talin and activates it[34],[35],[36]. α-actinin, which binds to actin, is also reported to bind β1 integrins directly[37] and also indirectly through vinculin[38]. Another crosslinking protein, filamin, also binds to the cytoplasmic tails of β1 and β7 integrins[39].

These linkages define a molecular linkage, or clutch, that shunts retrograde forces from actomyosin contraction or resistance generated by the leading edge membrane to the ECM. The efficiency of the clutch - that is, the degree of engagement (binding strength) between the components of the linkage (ECM proteins, integrins, actin-binding adaptors and the actin filaments) - regulates the coupling between adhesion and protrusion.

Talin, vinculin and α-actinin can all regulate integrin avidity by clustering integrins and actin filaments. The binding strength of these proteins to integrin and/or actin is tightly regulated. Mechanisms of regulation include conformational changes induced by binding to their partners (for example, vinculin to talin or actin[36]), phosphorylation (for example, α-actinin[40]), or mechanical force (for example, talin[41],[42]). There is also evidence that integrins themselves modulate their activation in response to mechanical forces[43].

Signaling: A plethora of signaling molecules also associate with integrin-containing adhesions. Some are kinases, whereas others function as scaffolds that recruit additional molecules to adhesions. A key signature of several adhesion proteins is their prominent phosphorylation on tyrosine residues[44].

The proteins outlined above are only a sample of the best-characterized adhesion molecules; more than 180 proteins participate in a complicated network of interactions called the 'adhesome'[54],[55]. The components of adhesions and their interactions depend on the type of adhesion, the integrins that are present, the presence of other receptors, and the cell type. These complicated signaling networks generate a plethora of signals that not only control cell migration (by controlling actin polymerization and disassembly, adhesion formation and assembly, etc.), but also many other cellular functions, including proliferation, gene expression and cell survival. Furthermore, adhesion is central in the cell's ability to sense its surroundings. Adhesive foci act as the cell's 'sensory organs', which inform the cell of the mechanical and chemical properties of its environment. These data are integrated by the different signaling networks, generating polarized responses that control protrusion, formation of new adhesions at the front and disassembly at the rear of the cell.